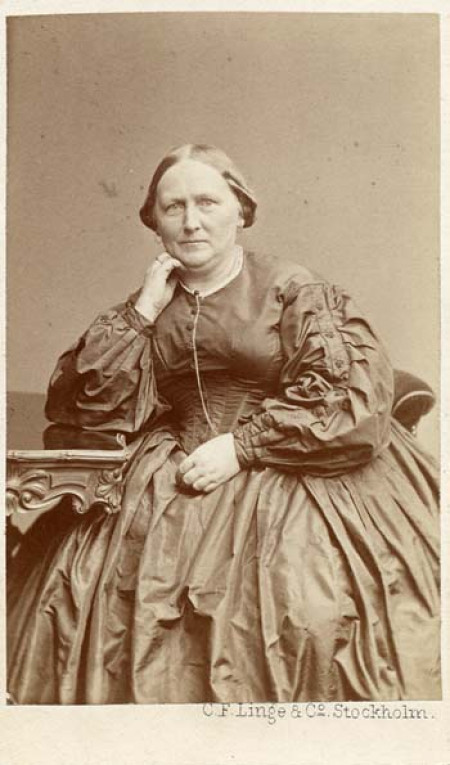 (translated from Swedish by Google Translate)

Jeanette (Johanna) Apollonia Berglind was born in Stockholm on August 21, 1816. She was born an orphan and was adopted by a widow. Her childhood was difficult because she suffered for a long time from the effects of a broken leg she suffered at the age of three.

The commitment to the rights of the deaf awakened with the employment she had from 1834-1840 at the Institute for the Blind and Deaf-Mute at the Manilla School in Stockholm. She learned sign language, but when the school's founder, Per Aron Borg (who had been a friend of her foster mother), died, she moved from Stockholm and took employment as a servant, governess and lady-in-waiting with the plan to save money to eventually be able open your own school for the deaf. For many years she tried to get grants, but it was only when Fredrika Bremer got involved that the money started flowing in.

Jeanette moved back to Stockholm in 1852 and in 1860 she was able to open the school which, at Fredrika Bremer's suggestion, was named Tysta skolan. In the beginning it was located in a three-room apartment at Norrlandsgatan 33 before the business could be moved to a more suitable premises at Stora Gråbergsgatan 25.

The school's patrons were King Karl XV and Queen Lovisa, and thanks to their, and others', donations, the school was able to buy a property at Norrtull on the outskirts of Stockholm. The students had their own garden and chalkboards were used to write answers on during lessons. Jeanette resigned as director of the school in 1882. She never married and died on 19 September 1903 in Adolf Fredrik's parish in Stockholm.

Berglind was described as a humble and warm personality, which gained a lot of support from private financiers because of her agreeable personality. She was described as a tender mother to her students, as one of her goals with the school had been to see to their emotional needs as well. As an educator, she had been instructed in sign language by her mentor Borg, and she preferred this method at her school: she did introduce speaking methods to her students in 1868, but did not consider it a success. She accepted students with an individual fee. She was the principal of the school from 1860 to 1882. Her school was highly regarded: three of her female students were to serve as teachers at the later public schools for the elderly deaf and mute. In 1880, she was promised a governmental pension on the date of her retirement. Berglind retired in September 1882.