In Deaf Education and the Deaf world, Milan 1880 means the Second International Congress on the Education of the Deaf, held in Milan from 6 September to 11 September 1880. 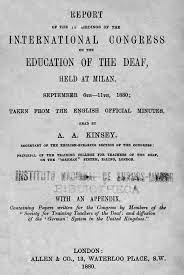 Another name for the same event: the Milan Conference.

Most people will know that at this Congress, a resolution was accepted that banned the use of sign language in the education of the deaf. It was decided that deaf children had to be educated orally. Teachers and students had to communicate through spoken language. The main objective of the education of deaf children was to teach them to speak and lipread.

But who made this decision? And why? And how is it possible that this resolution - made by a small number of people - had such very far-reaching consequences for centuries to come? 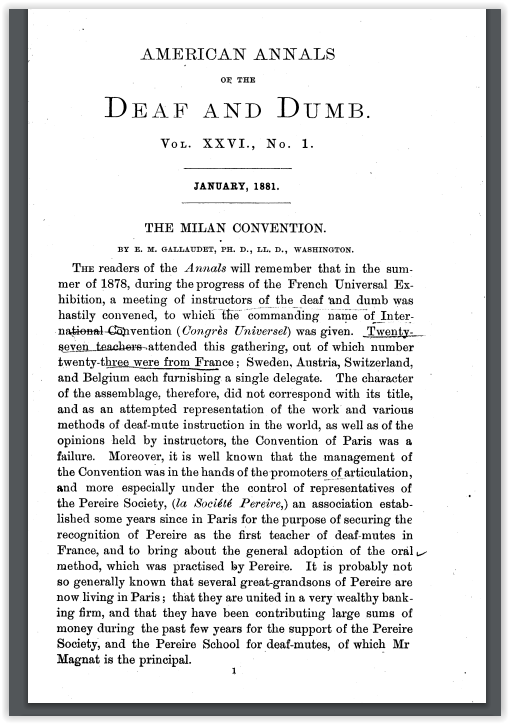 "Nevertheless, the meeting at Milan was the single most critical event in driving the languages of the deaf beneath the surface; it is the single most important cause - more important than hearing loss - of the limited educational achievements of today's deaf men and women, eighty percent of whom, in America, are engaged in manual or unskilled labor."

"In the aftermath of Milan, the conception of the deaf as a social class regressed to the view that had prevailed a century earlier, when Epee was beginning his labors: as their poor achievement confirmed, they were defective.

"Everyone knows," said our inspector-general, "that the deaf are inferior in all respects. Only professional philanthropists have said they are men like everyone else...
Similar to homo-alalus, to man without speech in prehistoric times, yet even more retarded since they cannot hear, they pass among like men as their shadows, without hearing them, without understanding them: all human things are foreign to them."

The suppression of sign, the firing of deaf faculty, the retrenchment of educational goals, and the medical model of the deaf as defective all conduced to Milan's last catastrophic effect: the infantilizing of deaf young men and women. For the oralist teachers, childishness and docility were desirable qualities in a pupil, (..). "

Who proposed the Milan resolutions? And who were the people who voted in favour of them?

This is what we know: 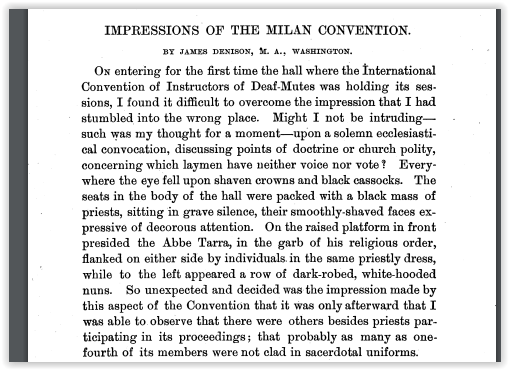 1. The Convention, considering the incontestable superiority of articulation over signs in restoring the deaf-mute to society and giving him a fuller knowledge of language, declares that the oral method should be preferred to that of signs in education and the instruction of deaf-mutes.

2. The Convention, considering that the simultaneous use of articulation and signs has the disadvantage of injuring articulation and lip-reading and the precision of ideas, declares that the pure oral method should be preferred.

3. Considering that a great number of the deaf and dumb are not receiving the benefit of instruction, and that this condition is owing to the impotence of families and of institutions, recommends that governments should take the necessary steps that all the deaf and dumb may be educated.

4. Considering that the teaching of the speaking deaf by the Pure Oral method should resemble as much as possible that of those who hear and speak, declares

a) That the most natural and effectual means by which the speaking deaf may acquire the knowledge of language is the "intuitive" method, viz., that which consists in setting forth, first by speech, and then by writing the objects and the facts which are placed before the eyes of the pupils.
b) That in the first, or maternal, period the deaf-mute ought to be led to the observation of grammatical forms by means of examples and of practical exercises, and that in the second period he ought to be assisted to deduce from these examples the grammatical rules, expressed with the utmost simplicity and clearness.
c) That books, written with words and in forms of language known to the pupil, can be put into his hands at any time.
Motion carried.

5. Considering the want of books sufficiently elementary to help the gradual and progressive development of language, recommends that the teachers of the Oral system should apply themselves to the publication of special works on the subject.

6. Considering the results obtained by the numerous inquiries made concerning the deaf and dumb of every age and every condition long after they had quit school, who, when interrogated upon various subjects, have answered correctly, with sufficient clearness of articulation, and read the lips of their questioners with the greatest facility, declares:

a) That the deaf and dumb taught by the Pure Oral method do not forget after leaving school the knowledge which they have acquired there, but develop it still further by conversation and reading, when have been made so easy for them.
b) That in their conversation with speaking persons they make use exclusively of speech.
c) That speech and lip-reading so far from being lost, are developed by practice.

7. Considering that the education of the deaf and dumb by speech has peculiar requirements; considering also that the experienced of teachers of deaf-mutes is almost unanimous, declares

a) That the most favourable age for admitting a deaf child into school is from eight to ten years.
b) That the school term ought to be seven years at least; but eight years would be preferable.
c) That no teacher can effectually teach a class of more than ten children on the Pure Oral method.

8. Considering that the application of the Pure Oral method in institutions where it is not yet in active operation, should be to avoid the certainty of failure prudent, gradual, progressive, recommends

a) That the pupils newly received into the schools should form a class by themselves, where instruction could be given by speech.
b) That these pupils should be absolutely separated from others too far advanced to be instructed by speech, and whose education will be completed by signs.
c) That each year a new speaking class be established, until all the old pupils taught by signs have completed their education. 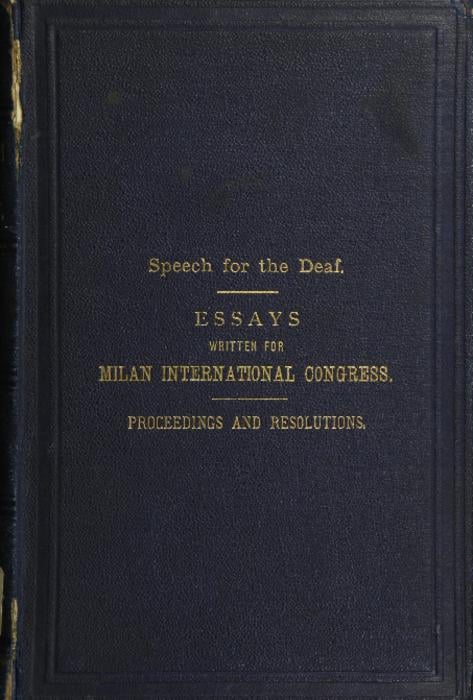 The image of the book is from the Gallaudet Archives. You can download a .pdf of the book here: https://gaislandora.wrlc.org/islandora/object/rarebooks%3A56

How is it possible that these resolutions made by a small group of people had such wide ranging and for many: disastrous effects for at least a century?

Because after the Milan Conference, educators of the deaf in Europe and the US banned not only sign language, but also deaf teachers from their schools: "an act of discrimination and violation of human and constitutional rights." (from the Apology made in 2020 at the 21st International Congress on Education of the Deaf in Vancouver, BC, Canada, see the next slide).

It is not difficult to understand why the resolutions were accepted:

Edward Miner Gallaudet and Reverend Thomas Gallaudet fought against the resolutions, but were outvoted. Although he could not overturn the Milan resolutions, Gallaudet ensured that the United States would not be completely converted to oralism-only. High school students in institutes for the deaf in the US continued to use sign language, and Gallaudet College (now Gallaudet University) as a university permitted and still permits full usage of sign language.

But why did all other schools for the deaf in Europe and the USA change to oral education after the Milan Conference?

One probable reason: because most deaf children are born in hearing families who want their child to be 'normal'. And because professionals promised, and still promise, that deafness can be 'cured'. One example of many:

"Oral deaf education seeks to equip an infant with verbal communication skills, and to enhance their personal and social development for daily challenges. This education means deaf infants can gain speech and language skills at a similar pace to their siblings and peers."

The 2010 ICED Organizing Committee opened the 21st International Congress on the Education of the Deaf in Vancouver, Canada with a long-awaited sweeping repudiation of the 1880 Milan ICED resolutions.

The Organizing Committee and the British Columbia Deaf Community (BCDC) collaborated on the statement,

The New Era Accord begins with the statement of working with national governments to adhere to the principles of the United Nations Convention on the Rights of Persons with Disabilities (CRPD) which states that sign language is a human right and that education includes full acquisition of language, academic, practical and social knowledge.

The other statements include endorsement of the resolutions adopted by the World Federation of the Deaf at its 15th Congress in 2007 including equal and appropriate access to a multi-lingual, multi-cultural education; inclusion of Sign Languages as legitimate languages equal to the nation’s spoken languages; the inclusion of Deaf people in all aspects of education from the very onset; and the promotion of human rights for all.

After Joe McLaughlin, member of the Organizing Committee, read the Statement of Principle and Accord for the Future to the plenary audience of about 750 participants, there were emotional cheering and standing high-fives ovations in response to this significant dawning of a new era of human rights and alliances. Participants at the ICED Congress and the BCDC were invited to sign the document. 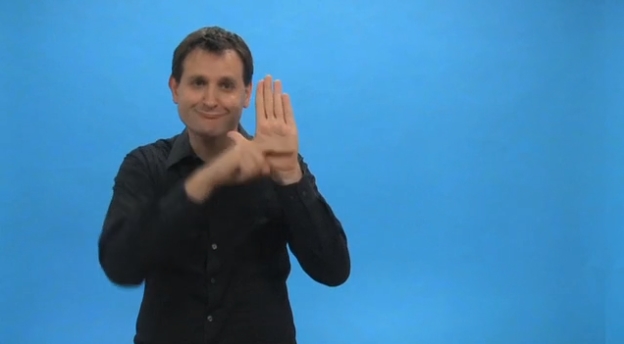 The above film presents the International Signs version of “A New Era: Deaf Participation and Collaboration” which in 2010 replaced the ICED Milan 1880 Resolutions by rejecting them. It lists several callings upon Nations of the world to take heed of requests by both the global educational community (International Congress on Education of the Deaf) and the global Deaf community represented by the B.C. Deaf Community, Canadian Association of the Deaf, and the World Federation of the Deaf.
Translated by Institute for German Sign Language and Communication for the Deaf at University Hamburg, Gebardenwerk, Hamburg, Germany. 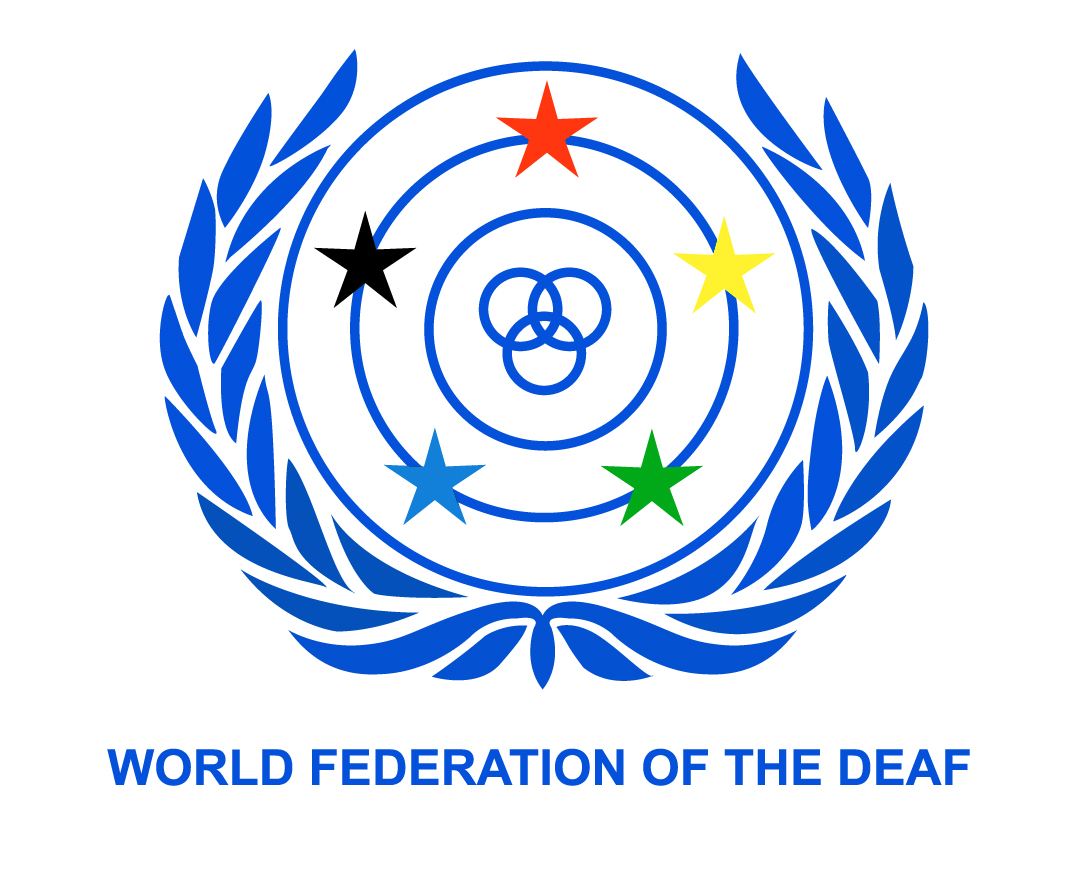 "As emphasised by the CRPD (United Nations Convention on the Rights of Persons with Disabilities.), sign language is inseparable from deaf people’s human rights.

Language and culture are inseparable, and sign language(s) are a critical component of deaf culture and the deaf identity. Sign language is vital to every deaf person’s cognitive, social, emotional, and linguistic growth. Without early sign language exposure, deaf children are deprived of a strong language foundation. This is why the WFD promotes sign language rights for deaf children, and the right to bilingual education for all.